Home » Uncategorized » Jon Corzine, MF Global Enjoyed Tryst with Washington & Credit Rating Agencies, Who Learned Nothing from the Great Recession
« My Grand Recessional for Europe as It Dances Rings Around the Euro Crisis One More Time
Economic News Articles – Archive for Week of 12-11-11 » 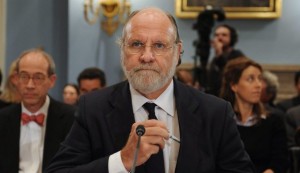 Jon Corzine, MF Global’s CEO, loved to take the biggest gambles he could find with other people’s money. He championed investing MF Global’s money and allegedly their client’s money in European bonds with purchases large enough to bankrupt the firm six times over if a single bet failed!

The board at MF Global Holdings Ltd apparently loved these games of bondage because they went along with every sub-prime bond purchase Corzine wanted to make. Jon Corzine was the James Bond of high rollers to them. He took a dying firm and turned it into a Casino Royale. Corzine also enjoyed many personal dalliances in the lobby with U.S. government regulators to keep them from intruding on his inside gambling.

Thus, his risky bets went on for over a year with everyone fully aware that Corzine was racing MF Global Holdings Ltd along a cliff’s edge. From the stories told so far, it would appear no one in the government, the S.E.C., or his board of directors whispered a word to stop him.

Most significantly, the nation’s largest credit-rating agencies that are supposed to be the Watchdogs of Wall Street — Moody’s Investment Services and Standard and Poor’s — actually lauded the gambles that Jon Corzine was taking through 2010 and 2011 at the heart of the Great Recession. These two beat cops were practically his Lady Luck on each side while he ran his bets at the table. When the ratings agencies finally did see problems coming in October of 2011, Moody’s flip-flopped on Corzine, changing its credit rating for MF Global overnight to near-junk status. MF Global stock plummeted, busting the perilous company by pushing it over the edge of bankruptcy.

How did Moody’s so completely miss the risk all along to where its credit rating of MF Global took such an upset overnight? How did the credit agency that helped create the Great Recession by completely missing the millions of credit risks that caused the recession manage to miss this one, too? You’d think they would have learned to graduate their ratings downward from an earlier starting point, instead of performing these overnight flips in bed from excellent to almost junk.

[MF Global’s] board, according to former employees, signed off on the European bet multiple times. And for the first time it is now clear that ratings agencies knew the risks for months but, as they did with subprime mortgages, looked the other way until it was too late, underscoring how three years after the financial crisis, little has changed on Wall Street.

…The consequences of the firm’s collapse have been severe: Some $1 billion in customer money remains missing and thousands of clients, including small farmers in Kansas or hedge funds in Connecticut, still do not have nearly a third of their funds.

Some of that money may never be recovered if, as some regulators now fear, MF Global used it to cover trading losses and replenish overdrawn bank accounts.(Continued in The New York Times)

Jon Corzine-MF Global: another tale of courtship between Wall Street and Pennsylvania Avenue

It is not hard to find scintillating stories about the snug relationships between Wall St. Jons and Pennsylvania Avenue whores these days. Last month we learned how former U.S. Treasury Secretary Hank Paulson had a cosy little tête-à-tête in 2008 with the Wall Street boys who work the banks and brokerages, wherein he entertained them with stories of Fannie Mae’s troubles just before she tipped her skirts and said, “Take me.” Paulson conveyed what sounded like lovely little teasers of insider information to his wealthy comrades. This month we get new titillating tales from the Goldman-plated Jon about how he successfully wooed S.E.C. regulators in Washington to look the other way from his high-risk deals. Nice!

Despite this setback, no one was questioning Corzine’s pull in Washington. In April 2011, he held a fundraiser for President Barack Obama at his Manhattan apartment and he is one of Obama’s biggest bundlers [Did they say “blunders?”], having cobbled together more than $500,000 from his Wall Street friends.

Such was Corzine’s standing in the capital that when rumors surfaced last summer that Treasury Secretary Timothy Geithner might resign and return to New York to be with his family, Corzine’s name was at or close to the top of the list as a possible replacement. (Bloomberg)

With riveting tales of seduction like this, Wall Street and Pennsylvania Avenue should be able to count on long-term occupation as the two biggest red-light districts in America.