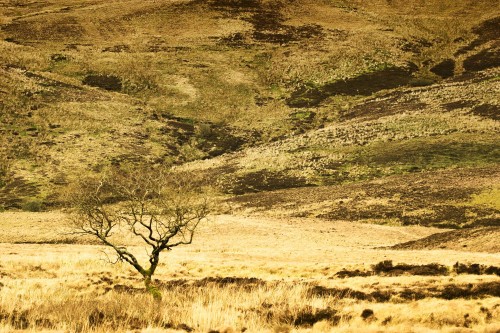 The following is not simply a list of negative risks to the economy but a list of of serious economic conditions that are already placing drought-like pressures on the overall economy. This list doesn’t include the long-term structural problems with the economy, such as its high debt burden, but just the forces that have risen against it this year.

The minute [markets] stop moving, a powerful, even if short-lived, impulse takes over to reevaluate, cherry-pick and average down. Even if you’re sure the story hasn’t run its course, it takes real moxie to remain exposed to the other side of trades you were very comfortably holding for the previous weeks and months. We’re all leery of getting caught in over-crowded trades…. This is a be nimble, very nimble, environment…. Traders will need skills that have atrophied over years. (Zero Hedge)

There is a fair amount of high pressure building that could mean a withering el-niño summer for the economy during a time when Fed relief, which the economy has grown dependent on, is drying up while fiscal refreshment is going to remain distant. As additional pressures build against the economy in the next week or two, I’ll add to the end of this list at The Great Recession Blog. So, you may want to check back.

Total household debt now exceeds the peek it hit just before the economic collapse into the Great Recession hit. While the number of households is also up, wages are correspondingly down, so households have maxed out … again:

Total U.S. household debt was $12.73 trillion at the end of the first quarter of 2017, up $473 billion from a year ago, according to a Federal Reserve Bank of New York survey. Total indebtedness is now 14 percent above the 2013 trough of household deleveraging brought on by the 2007-2009 financial crisis and Great Recession. The previous peak, in the third quarter of 2008, was $12.68 trillion…. Auto loan and credit card delinquency flows are now trending upwards, and those for student loans remain stubbornly high.” The survey showed lenders tightened borrowing standards for home and auto loans, a sign of their increased caution. (Newsmax) 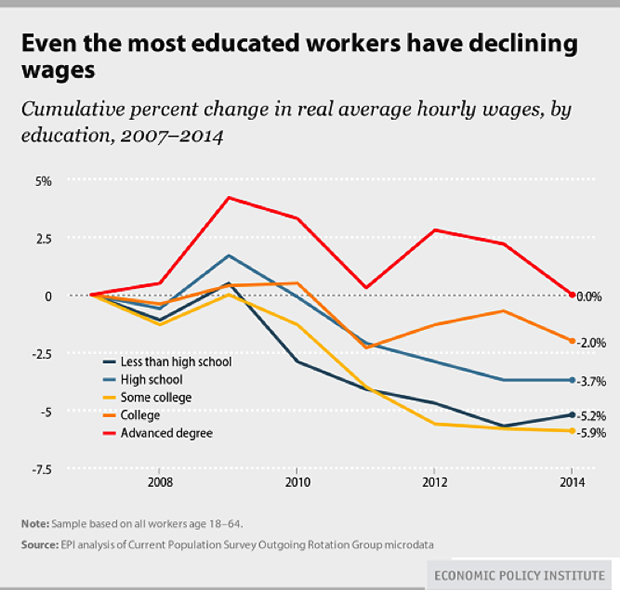 While population rose about 7% between 2007 and 2014, wages for most people have dropped about 5% during that time. (The time frame of the graph above.) Those two changes roughly cancel each other out. With lenders now tightening borrowing standards for mortgages and auto loans out of caution, they are draining liquidity out of those markets. That may be contributing to the decline in those markets as listed above. Lowered liquidity at at time when we are hitting peak debt again are combined factors that will likely keep those markets down.

Housing and all other construction take a big drop as we move into June, following March’s rise:

So, now, even one of the few bright spots is gone.

“Goldman Sachs and Bank of America were among the biggest beneficiaries of the stock rally in the weeks after Donald Trump’s election victory in November, as investors looked forward to a profit-boosting mix of higher interest rates, lower taxes and lighter regulation,” the Financial Timesreported.

“But some of those underpinnings have fallen away since then, as Trump’s early setback over healthcare policy cast doubt over his ability to implement other promised reforms,” the FT explained….

“Tax reform was difficult enough in 1986, when you had bipartisan support and an extremely popular president…. Without either, it always looked like a bit of a long shot.”

To be sure, in an even more disturbing sign, CNBC reported that the financial sector “just gave up all of this year’s gains, and some strategists say that’s sending the broader market a message about the health of the economy.” (Newsmax)

Auto inventory are back up to their highest point since just before the auto crash in 2007:

With 935,758 unsold GM units collecting dust in dealer lots, this was the highest inventory number in 9.5 years, the highest since Nov. 2007, and, as Bunkley reminds us, “one month before the recession officially began.” (Zero Hedge)

That was April inventory. May’s inventory, just in, rose by another 30,000 vehicles.

The state of Illinois was just downgraded to the lowest credit rating ever given to a U.S. state (one mark above junk) by Moody’s and S&P. The downgrade is due to “unrelenting political brinkmanship [that] now poses a threat to the timely payment of the state’s core priority payments.” That brinkmanship is a just a microcosm of what is going on in the US congress. It is also due to “intensifying pressure from pension liabilities,” something congress hasn’t even begun to address with both government pension funds and Social Security and Medicare. Wait until that battle hits! If Illinois’ credit gets downgraded to junk, it’s financial problems instantly rise exponentially.

The retail apocalypse grows: Not even halfway through 2017, closures of retail stores have doubled last year’s closures as of this time and already exceed the last peak in closures during the crash of 2008. The bottom line is simple here. Commercial eal-estate investment trusts (REITs), malls, mortgage-backed securities (remember those), and their bankers are in a lot of trouble. The anchor stores are closing up the worst, which will pull others down in the wake by reducing traffic to malls. “Thousands of new doors opened and rents soared. This created a bubble, and like housing, that bubble has now burst.” According to Credit Suisse, 20-25% of US shopping malls will shut down within the next five years. While this is due to a paradigm shift in how people do their shopping, not just an overall reduction in retail sales, it will send shudders and close shutters throughout real-estate-based retail economy, having a huge impact on construction, land sales, banking, jobs, etc.

Things look even more perilous in the stock market at the CAPE ration, which measures how pricy stocks are in comparison to their ten-year average has just hit thirty, matching the rarified atmosphere of stock prices when the 1929 crash happened. The only time stocks have ever been more overpriced was just before the dot-com crash.

The US jobs market finally tanked, coming in at 138,000 new jobs in May, which is near the generally considered recessionary level of 100,000 new jobs. That’s a 32% drop from last month and is much lower than any economists expected (the average expectation being 185,000 new jobs). Even the insanely optimistic Ron Insana said the report could be a worrisome sign of a “pronounced economic slowdown,” according to Newsmax. Wage data was also softer than expected.

“With the Federal Reserve poised to raise interest rates again in June, today’s data notwithstanding, and scant fiscal stimulus loaded in the Washington pipeline, this could be the beginning of a worrying trend,” he wrote. (Newsmax)

When even Insana is starting to read bad news in the tee leaves, you know it’s getting hard to keep putting lipstick on this pig of an economy.