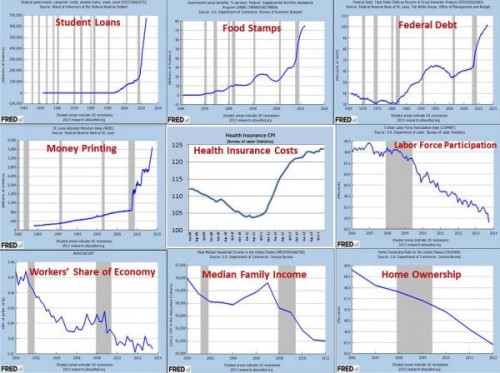 If you refuse to blame the Obama administration for the “economic recovery” pictured in these charts, then you’re just a Democrat protecting your own ideology. If, on the other hand, you refuse to blame the Republican congress, you’re just a Republican protecting your own ideology. Either way, you are part of the problem. You are one of the millions of reasons this nation is going nowhere economically.

If you believe those who have told you that we have actually been experiencing economic recovery, you are too easily lulled into sleepwalking. Perhaps you are so easily misled because it is what you want to believe, and your beliefs are about to leave you dumbfounded.

If, on the other hand, you don’t believe any of that, you’re a sign of hope for the nation.

I have been saying for many months that this fall we will enter a period where the world falls apart economically and learns the hard way that the much-talked-about “recovery” has always been just another phony bubble. If you believed in the recovery, you have been believing in a bubble — no different than those who believed in the late nineties that corporations that never made a dime were worth billions of dollars or like those who believed almost religiously that real estate had a kind of intrinsic value that could never go down.

The illusion is ending with the exact timing anticipated. We can see the economy beginning to crumble all around the world. The autumn of our discontent is nearly here, when I’ve said the crashing of stock markets will lead into global economic collapse. The foreshocks have been severe, and the fault lines are already starting to appear on the surface where it becomes harder to deny their reality.

Now that you can see there has been no economic recovery…

Look again at the charts above. Seven years, have given the American middle class no improvement. In every category, we are so much worse off than we were seven years ago that it is ludicrous to even use the word “recovery.” What has recovered? What is finally as good as it was before the Great Recession began?

Fact is, neither Republicans nor Democrats have done anything to create true economic recovery for the middle class. Both parties cling to tired answeres that created this Great Recession:

Some of these ideas are Republican, some Democrat. Whatever? Who cares? They’re all stupid. They are all entirely bad for the economy and, in some cases, greedy and corrupt. Both parties work from tattered play books that their followers believe in as dogmatically as if they were religious texts. Until Americans recognize that neither party is even remotely close to comprehending how to create a healthy economy, we will never see true, enduring, economic recovery.

We will see the same recirculated, regurgitated doctrines for as long as millions of Republicans and millions of Democrats continue to dogmatically cherish their party lines because they don’t have the courage to admit that the ideas they’ve held on to are bankrupt in themselves.

In my next article, I’ll talk about how to create sustainable economic recovery with solid capitalist principles.