Major Stock Trouble in One Chart 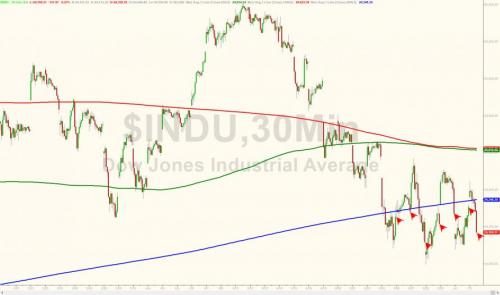 While I don’t make my predictions based on charts, many who make investment choices do make their decisions based on technical lines of convergence in the charts and have for decades. One of the most persuasive and bearish technicals is when an index that has been running above its 200-day moving average first closes below its 200-day moving average. Because that line is seen as a dominant line of support when an index is trading above it, a close below it is seen as sign of dominant trend reversal. The only thing more persuasive is when it tries to rise back above that line and fails to hold above it on the next attempt.

The charts, in other words, tend to become self-fulfilling prophecies because of the huge number of people who look to them for signs of where the market is going.

Not only has the Dow just closed below its 200-day moving average seven days in a row now. It has done it while crossing the middle day of the year, which is one of its most optimistically positive days.

The worst sign investors are likely to follow that I see on the chart above is that the intra-day attempts to bounce back above that line have drawn down closer and closer to the line each time. It now appears that the next time the Dow will merely bump its head against the bottom of the line or maybe not even make that. From there (for many who are persuaded by technicals), it’s supposed to be downhill al the way.

Moreover, a “death cross” just happened today where the 50-day MA crossed below the 100-day MA. Also seen as a bearish trend change.

Of course, I will also point out that this barometer used to be very accurate before the 90s and has become increasingly less so in more recent times. That could be because fewer people believe in it, so it has less potential to become a self-fulfilling prophecy. That is to say, not as many people are inclined to start selling when they see this sell signal; so the market has less tendency to fall. However, if times are already taught with tension over trade, and the sell signal flashes seven times in a row, people may be a little more reflexive (if there are any actual people still trading and the financial world is not entirely run by computers).